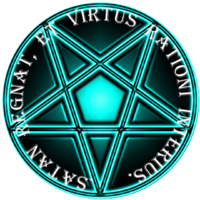 I am an alcoholic and I follow a 12-step recovery process as set out by Alcoholics Anonymous (AA). I have experimented with lots of other drugs but alcohol is the one that gripped and got a hold on me.

I often get asked by both confused Christians and confused Satanists as to how Satanism and recovery can work together. For me it’s really quite simple and simplified further when you look at it from a rational perspective and at the science behind it.

Addiction is a physiological condition as much as it is a psychological, emotional and social issue. Alcohol especially will only be addictive in a minority of cases with people who may have a different chemical make-up in their brain. Most people will not be compelled to drink, whereas an alcoholic will no matter how much he/she drinks.

When alcohol enters my system it does not affect me the way it does a ‘normal’ drinker. It starts off a craving that is only stopped when my body shuts down. The increase in blood alcohol levels would ‘normalise’ my emotions and behaviour while also improving my functionality. By increasing my blood alcohol levels further my functionality only improves, unlike a normal drinker. This is the case until the blood alcohol level starts to drop, through me slowing down my drinking or stopping at the end of the night. I would then appear to become more and more drunk quite rapidly and people would say “I just went a bit too far and it caught up with me” or “you just had one too many again”.

There came a point shortly after my 24th birthday having come around from another 7-hour black-out, on a bus, on the wrong side of town, when I felt I needed to do something about my drinking as it was having a negative effect on my life. I had attempted to deal with the situation on my own for a few years but had only been able to stop drinking for short periods. So I decided that this time I needed to get help.

I was very weary of attending AA as I had the impression it was very ‘god’ orientated and – don’t get me wrong – it can be, the majority I have come across are Christian and Catholic. Here in the UK though I have met people of many different religious beliefs from Pagans, Chaos Magicians, Atheist and Buddhists to people who even believe the Sun is their higher power. The 12-step programme of AA is written from a Christian perspective but can easily be adapted to fit a satanic point of view with a few word adjustments.

Lots of people I see in the recovery process tend to swap their slavery of addiction to their drug of choice for an addictive slavery to an imaginary God. I see lots of people achieving milestones in recovery only to sit there and thank god for doing it for them, blaming god if it all goes wrong and I hear things like “it wasn’t part of god’s plan”. After being a slave to my addiction for so long, I vowed never to be a slave to anything again. As a Satanist I take full responsibility for my own actions. I am the master of my own reality – no one else.

Take note of all the I’s and me’s in those sentences, there was no flash of bright light or no angels coming down from the sky and telling me I had to stop drinking and change my ways. It was all me. When people have these delusionary visions it’s because deep down in their subconscious they know that they have a problem. They however are not ready to admit it and because they can’t bring this idea to their conscious, the subconscious has to create a fantasy vision, an hallucination, which can shock them into realising the truth.

When I decided to address my alcohol dependency, I no longer liked the person that was reflected back every day in the mirror. So, I took responsibility for my actions and changed from the inside out. Today I look in the mirror with pride.

I have had to search the darkest recesses of my being, through serious and honest self-examination. I have completely analysed how, what and why I reacted to situations the way I did. I have had to learn what my triggers are and how to avoid my reactions having a negative effect on my life. I had to learn the areas where I am the weakest, strengthen them or put things in place so they are not so easily exposed and exploited. I have learnt what my true strengths are and how to use them to my full advantage. Going through this process takes true strength and gave me the knowledge to understand the true power I have within. However it is an ongoing evolutionary process for me and I will learn more about myself as I face new challenges. It is also where the Futureproof Adaptability book really hit home for me.

I have gotten my alcoholism under control by not drinking. However I have to be conscious, as with any addiction, that although I have stopped feeding the initial addiction the addictive personality trait stays within me and will become attached to other things. I therefore need to focus my energy on positive things and things that can benefit me and my life. Otherwise I can be sucked into focussing on negative behaviours; feeding off negative emotions that will then become as destructive to me as drinking was. Because of this, I have utilised another aspect of my personal Satanic path and done extensive work with the rune Thurisaz.

Thurisaz is more commonly known as Thorn and many consider it a negative – or even destructive – rune. I have found though that, due to my chaotic nature, it helps me to pinpoint my focus and I use it like an expert surgeon would use a scalpel to remove unwanted growths and cancers.

The 90/10 philosophy of Rational Satanism has been a revelation for me. It has allowed me to do things within the 10% to advance the general progress of my recovery and understand myself, where I would have stumbled before trying to find a different way of doing things. For example when people talk of god or magic, I tend to think of things rationally in terms of psychology, tricks of the mind that can be done knowingly on yourself. Lots of things start in my 10% as magic, until I understand the science behind them and can implement them without the need for any kind of ritual or spell work in order for it to be successful. I do though do things in reverse sometimes and take things into the 10% for a greater effect when I need a bit of a push in the right direction. Even though I know the science behind what I’m doing, the mindset of the ritual space will give things that extra edge I might need.

I hope that, if you are struggling with any form of addiction, what you have read here and the philosophy behind Rational Satanism gives you the strength to crush it, take charge and find your true power within.

On a personal note I’m really privileged to be able to contribute to this book ( Rational Satanism S-theory ) especially on this subject. The release date of this book is very special to me as it falls on the exact date of my first AA meeting and what I count as the start of my recovery. I have not had a drink since that date in 2007.