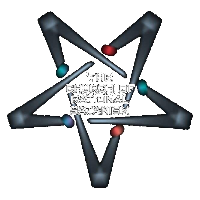 A scientific term that could easily relate to Satanism is Entropy.  In science entropy is the measurement of the  disorder  of a system, the disorder is the amount of possible states a system could appear in, even though the composition are fixed with laws arising from nature. That tells us that by just knowing about the compositions of a system, it doesn’t tell us what the exact state of each molecule is. There could be an abundance of microscopic states of the system, which all correspond to the observed laws, but you can’t be ignorant by not understanding which state a system is in at a given time. Entropy is the disorder of a scientific system where not knowing  a potential state will give many individual results, as an example  imagine you are throwing at a dart board from a distance of  seven foot, as the dart leaves your hand you are aware of the forces of nature that are acting on it, but because of the distance that it's thrown and the size of the board, the dart has the potential to land anywhere, there are many possibilities of the end result of the system so that test has a high Entropy. Now if you stood only one foot from the dart board and threw, the chances of it landing anywhere is significantly less and a pretty accurate idea of its state at the end could be concluded, that result would have low entropy as there isn’t a large disorder present, which was the distance, allowing for low entropic results. You hear many LaVeyans using the term “entropy” for the dark force of nature, as they can’t see a trend of the different forces which are clearly evident, but I’m not taking the same viewpoint as those on the topic, it’s the “disorder” I’m going to take in to consideration to show how entropy is simply a representation of many Satanic systems, that any ignorant LaVeyan would shun as non-sense.

I will add I’m not going to rabble on giving all the boring long winded explanations of the complete workings of Entropy, if it’s something that resonates with you then you can easily look in to it at your pleasure. What I want to show is how Satanism has become a “disorder” and spread in to many different varieties each with validity, but to the LaVeyan Satanists, this idea on Satanic entropy couldn’t exist as to those individuals there is only one system and that would be impossible to contain any high entropy as the LaVeyan system would only have one state. To the average LaVeyan Satanist they see their system and the CoS as the absolute, the one and only type of Satanism that leads to one understandable system with low entropic values, they view reality and nature in a set state that they know that their system will have predictable results according to the ideology. There isn’t room for theorising or expanding on the system as the absolute that it is seen as doesn’t allow for  investigation, even when mentally decompressed this  wouldn’t function on a low entropic system as the outcome would have a high rate of predictability,(who can’t find it easy to predict a LaVeyans actions). It’s this narrow minded view of Satanism that has caused the entropy disorder. In my opinion, Satanism is a system with a high value of entropy “disorder”. This level of high entropy is related to all the different branches of Satanism that each promotes individual values. How can a system that promotes individuality have low entropic values when a low value would signify that a system can’t have “many” states of being, that is a very conforming standard. The disorder has evolved Satanism in to a wonderful thing, the high entropic values that are now clearly evident in the community flourishes individuality with each individual crafting their system to suit them. Be it atheist, Theist, Pantheist, Deist, all these individual viewpoints now thrive in the Satanic community each with a different state of being, or as this publication would put it, each with their own S-Theory model created reality.

The Rational Satanism philosophy was created for high entropy, as explained in Futureproof Adaptability no two systems will be the same, the foundations of a system can’t have entropic values as it’s the effects of what the individual does with it that gives the system many different states. We are the architects that build on solid foundations creating high entropy. This is one of the reasons that unlike CoS Satanism, high entropy Satanism cant be defined. There is no generic answer to what is Satanism as it would be you explaining your own life, your way of viewing the system. All you could offer a description of is the core foundations of the system, in Rational Satanism’s case it would be the 90% 10% and S-Theory concept that could be explained as they hold no entropy at all, they are not moving states. This view of high entropy as a description of Satanic systems gets validity due to all the states that Satanism can be seen as, there is no predictability in Satanism, there is no conformity, it’s for the individual to own as with high entropy Satanism it truly is “do as thou wilt”.