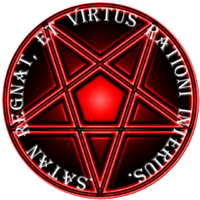 Right hand path, left hand path, really, who cares? It’s only terminology created to give order and significance to belief systems at opposing ends of the spectrum.  We are Satanists; do we need to align ourselves with the left hand path? Does that mean we have to adhere to left hand path expectations? Let’s have a brief overview of both paths, and all will become apparent.

Right hand path - Originally a phrase referring to Tantric systems that maintain rules of behaviour. A standard in Indian Yoga traditions, including celibacy and most other abstaining factors. These found their way into western occultism by way of the Theosophical society but suffered a slight change of meaning, and right hand path meant nearly the same as white magic, a magical system that claimed to contain morals and be used for good purpose.

Left Hand Path - Also from Tantra traditions, this is decided on attitudes towards alcohol, sex and meat, which are forbidden in right hand path Tantras, as they distract and cloud the judgment. In the left hand path Tantra they are used in ritualistic means to transcend from the limits of the self. This term came west by way of the Theosophical societies, and was distorted from its Indian Tantric roots. This came to represent the complete opposite of its counterpart, being linked to black magic and evil. Then (and what a surprise) due to the impact that Theosophy had, this become adopted by and synonymous with Satanism, and still is a very popular term among the Satanic community today.

From looking at these brief overviews it’s apparent that this term was adopted by Satanists due to its opposing and evil nature. But it is also a very inaccurate phrase to take on board. It is almost impossible to solely commit to either left or right. Does this mean we have no morals or we can never do something that appears to be good if we are part of the left hand path? If you’re on the right hand path does that mean you will never have a lustful thought or do something that’s considered wrong? You can’t give significance to human behaviors from terminology that is based on factors representing control and rebellion, right being a controlled action from various belief systems, and left being the rebellion to break away from it. Whether we like to admit it or not, we all perform actions from both paths, we can be good just as easily as we can be bad, but that doesn’t change who we are.

When you get the Satanists who state “I’m a left hand path practitioner” or those who spout “Death to dwellers of the right hand path” it’s so annoying. Terminology has moved on from the original usage of both paths, and now there is no need to use them at all.  I’m not in opposition of human behavior, which is what these represent. I’m in opposition of all the choking suppressions and anything that does not lead to earthly happiness. I oppose the written claptrap that is said to come from the right hand path, but I don’t oppose a good deed, which can also be said to come from the right. I would oppose an action which could come from the left hand path if I didn’t like or agree with it, but I wouldn’t oppose a hateful action from the left if I saw it was justified. I could ramble on about all the differing opinions and arguments for the right and left classifications, but I don’t see it as necessary.  Right and left hand path classifications just term what is supposed to be right and wrong, good and evil, moral and immoral, and are completely unnecessary.