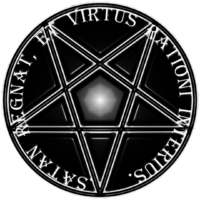 The Satanic mind-set is a naturally constantly evolving one, Rational Satanism was created to evolve with the individual as different ideologies come to make a pragmatic part of your personal Satanic paradigm. Rational thoughts remain our prime directive but self-evolution to the godhead will constantly move forward and change as you progress further down the path of pragmatic enlightenment. This is a fail point of many Satanic organisations, there is no room for evolution, the ideas become stale as mentalities change, the ideology in place won’t allow for your mind to evolve and craft your own system as that would deem you to be doing Satanism “wrong”. There is no type or way in Satanism it will always be “your way” while you are constantly evolving your natural thought processes.

In the environment we live in the human race has no need to evolve, we have already adapted to our environment, what we must do now is evolve the mind, certainly not to mystical proportions with delusional ideas of the e.s.p and psycho kinesis techniques that seem to be sprawling around with claims of being the next level of human evolution. What we need is to evolve the self and mind to the best it can personally be, the evolving Satanic mind-set is the next step in personal evolution, and this is a natural pragmatic advancement. Sadly this evolution is not going to happen to the human race naturally, now it’s limited only to the individuals who have the “s” type personality. The heightened awareness of the world and natural abilities to see things from another perspective are Satanically evolved aspects that you already own, but even these can grow to personally, rationally and pragmatically better the self.

You could say that evolution to the rational Satanist is attaining the pragmatic maxim. This is a vast forming of logic constantly guiding our enlightened thought processes to achieve the overall goal. Psychological apprehension allows nothing to be confirmed or denied about what’s in question but we are more than aware of it, this is the usage of 90% 10% thinking. The pragmatic maxim would allow cleanliness of our thought process as we would be considering the effects of what we have found would have on our practical reality, then our conceptions would base pragmatic reasoning on the whole of the usage. Using the maxim clears up many metaphysical issues while at the same time extracting and adapting that which you personally find useful along your personal Satanic evolution. The fact is certain types of conduct regarding paradigms can expect certain kinds of inevitable experiences, as it’s what’s expected. Systems using the metaphysical are achieving a false evolution of fantasy and failing to extract that which can pragmatically evolve the self to the higher level of pragmatic standards, this is lacking in practical consideration. The pragmatic maxim is a personal reflection of analysing our purpose of thoughts, and through our natural evolutionary process will always render our thoughts clear and practical to allow the self to advance.

This natural evolution is the future of Satanism, and unless there is a massive wave of natural selection over the human race this will remain just for the Satanist to achieve. There are an abundance of different philosophical stances that you can adapt and evolve in to your enlightened psyche, and Rational Satanism is simply the adaptable foundation that allows the Satanic mind-set to evolve it in to a personal system that excels the self to super normal proportions. To deem Rational Satanism to be a system of only one way would be stopping evolution from occurring and would appear no different to the other Satanic ideologies out there, This will never be the case. Rational Satanism evolves with individual minds; we are futureproof to the extent that our core foundation will never become redundant. The Devil truly is alive and he’s certainly inside our heads, he evolves through our constant mental evolution and logical pragmatic reasoning. It’s time for your mind to go seek the personal pragmatic maxim, so proudly carry your trident and wear your proverbial horns as you evolve the self to the next level of personal awareness, logical reasoning and pragmatic practicality.