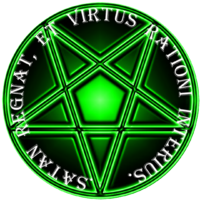 Remaining positive in life is just that, remaining positive, It’s a great natural attribute to make things look rosy, things will always become clearer when viewed with a positive attitude, and this persona reflects yourself in your daily routines. Positive attitudes further enhance the Satanists natural ability to utilize the third side as well as pragmatically assessing all situations for a positive outcome. Sadly a lot of spiritual attributes and other nuances of mysticism have been injected in to the realm of positive thinking, but even these can’t take away the pragmatic fact that being positive is simply that… being positive.

The law of attraction states that being positive attracts positive things and visa versa with the negative, what ever happened to the saying opposites attract? Thinking positive is not simply going to manifest in to all good things and make roses grow out of your backside, the same is for negative thinking, admittedly it will cloud your issues but it’s not going to bring a wave of bad tidings your way. Positive thinking comes natural to the Satanist, it’s a natural safeguarding measure using logical reasoning for all issues and attaining the correct psyche to sort it out and positive thinking still requires positive actions to make them reality.

Energy has also been mentioned a lot in the realm of positive thinking, you will hear many say we are all simply energy, this is correct to an extent. We are matter and the realms of quantum physics goes deeper, we are atoms, and in the working of an atom there is nothing there just measurable energy waves. Those energy waves can be measured and their effects seen, but they are not a material reality they are simply electricity, neurological connections. Thinking positive is not going to make these waves grow and manifest in to an external objective personal city of positivity. Every cell in our body has atoms lined up that give off 1.4volts of electricity, multiply that with every cell in your body and it’s a great amount, but it’s not mystical, it’s natural. Many fall in to the trap of creating thought forms and seem to think energy levels can be raised to objectively tackle issues and attract things to them, consciousness is matter and matter is consciousness, they are not two separate things and they are never going to go beyond the realms that is normal. This takes me to the saying “there are thinkers and there are doers” Thinking no matter what attributes you give to thoughts, they are not going to produce results without doing things with them.

LaVey knew this with the usage of greater ritual magic, the calling on the princes of hell, reciting various words and speaking your desire. You’re not creating a mystical scenario with these rituals, you’re simply creating a positive mental attitude to go out and make things happen by absorbing while intellectually decompressed the heightened personal positive psyche by actually believing that now what you want will happen. This is leading to a subjective event in ritual becoming objective pragmatically, but you’re doing all the work yourself it’s still not simply going to happen. It’s you that makes it objective by acting on the positive thoughts you have. This is again a natural pragmatic trait and with the attained godhead, there is not an inch of divinity involved as belief in the divine cause’s laziness and is a complete misunderstanding of physics and psychology, energy is not going to make things happen, you are. All faith and positivity is in your own godhead.

Belief in taking energy as more than it is makes an easy trap to fall in to, it can make things look simple and easy to obtain, but the fact remains it still all about you. It’s impossible to be positive all the time, if we were we would all go around like a Cheshire cat, but Rational Satanism is a system that allows positivity to come around completely naturally through many different techniques all individual to the Rational Satanist, as it’s what works for them. There may be some techniques you like the sound of from various workings involving energy and could quite easily use them in the 10%, but this again is just like greater magic, you’re simply naturally gaining a positive thought to act on, you’re not raising your atomic makeup.

Positive thinking is great, but sometimes you may need to think negative to be able to find the positive, it’s a two ended spectrum that has to be evaluated by the Satanist. Positivity will always be the pragmatic outcome but you firstly have to know what that is and like love and hate you can’t truly understand one without the other, To aim straight for the positive could leave room for the negative to take over as that hasn’t been dealt with, again this is a job for the usage of the third side. Find your path of natural positive thinking and make what you want to happen from it, but always safeguard yourself by evaluating the situation first.